The only son of an affluent Bakuran family involved in the repulsorlift industry, Tark Agros gained a reputation as a talented swoop racer. He is attracted to dangerous situations, so he did not hesitate to help a Jedi and droid escape from imperial forces. Tark is now convinced that he’s the Empire’s most wanted criminal, and he is prepared to see just how far he can push his luck.

In 19 BBY (Before the Battle of Yavin), Jedi consular Ekafti Acomar was traveling with protocol droid Max Power on a diplomatic mission to Bakura in the Wild Space/Unknown Regions part of the galaxy as the Clone Wars wound down. Unbeknownst to Ekafti, Max helped her survive Order 66, which outlawed all Jedi.

Young Jedi Thayne Highlander was part of a Republic task force dealing with an incursion by the Ssi-ruuk when he saw his master slain by Clone Troopers following Order 66. During the battle, Ari Sundar decided to leave her people, and Thayne had mercy on her.

Meanwhile, gambler and ex-Jedi Garos recently obtained a starship, and Oong Bak is its Duros engineer. We’ve all recently come together, but we don’t know one another especially well. Still, we have a common foe in the Galactic Empire and a desire to survive…. 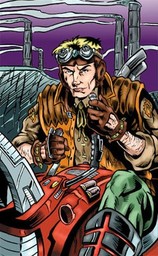